Wednesday 28 January 2015 The “Firefox App Challenge”, recently held in Bangladesh, is a nationwide competition open to any developer or company and one can participate by submitting a Firefox OS App to the Firefox Marketplace. To participate, one had to complete the registration process on the official site for this contest: www.firefoxappchallenge.com. From these registrants 100 participants were shortlisted to receive a two days Training in Firefox OS though every registrants were a competitor. Only the residents of Bangladesh were eligible for this particular competition. Participants were allowed to submit their applications in five different categories: Services (Social, Public, and Government), Entertainment, Games, News & Media, and Tools & Utility. A total of fifteen apps were rewarded as the winners. Each category has its Champion and Runner Up. Additional five prizes were given to the apps which were judged as “Outstanding Innovation” regardless of the category. The challenge began on 22nd October 2014 and ended on 4th December 2014. [caption id="attachment_8696" align="aligncenter"] 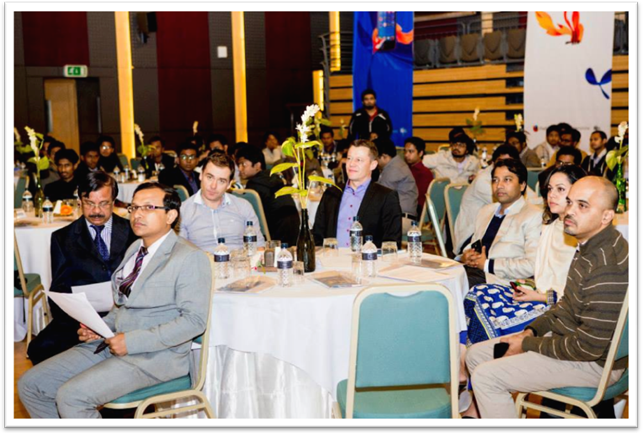 Guests at the Firefox App Challenge Gala[/caption] Jan Jongboom, Firefox OS Grand Master along with his team of jury evaluated the applications and selected the winners of the Firefox App Challenge. Firefox OS App challenge Gala event held on 13th January, 2015 at Grameenphone Head Office hosted by Mozilla, Grameenphone and MCC. Honorable guests were from ICT Ministry, Grameenphone, Telenor, Mozilla, Mozilla Bangladesh and MCC. Within fifteen winning teams, three of the participants named Anik Islam Avik, Md. Anisur Rahman and Salman Rahman Desh are from American International University- Bangladesh (AIUB). Md. Anisur Rahman and Salman Rahman Desh are also actively contributing to Mozilla and member of Mozilla Bangladesh. Anik Islam Avik with his Team Omlete of three members were awarded as 1st Prize in “Tools & Utility” category by making the My Salat app. The other two members of his team are Mofijul Islam from Dhaka University and Towhidul Islam from Northern University. The app mainly provides a details timings of all prayers time for Muslims. Besides it has some great features like Tasbih, nearby mosque locations, auto-silent mode if the device is near a mosque and so on. The app is available here at Firefox Marketplace: marketplace.firefox.com/app/mysalat [caption id="attachment_8697" align="aligncenter"] 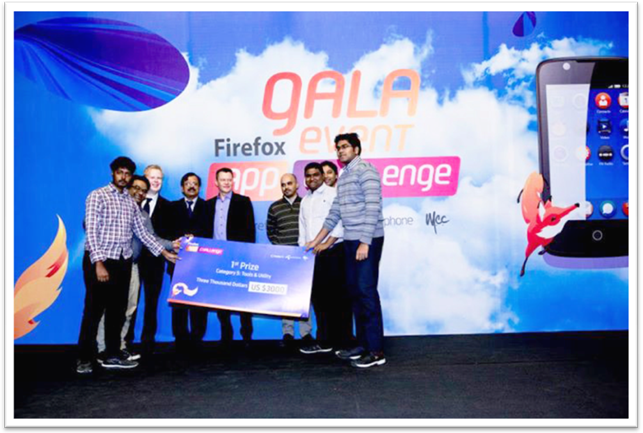 Team Omlete is receiving their prize[/caption] Md. Anisur Rahman and Salman Rahman Desh as a team called TwinFox were awarded as Outstanding Innovation Prize in “Games” category by making a game familiar as Tappy. This is a brain teasing game to test the concentrate level of a user. User taps on different types of color circles to earn points where some circles let them get points and bonus and some deducts. The app is available here at Firefox Marketplace: marketplace.firefox.com [caption id="attachment_8698" align="aligncenter"] 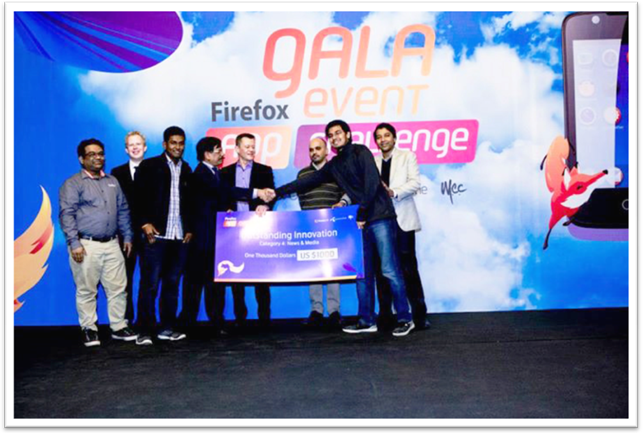 TwinFox is receiving their prize[/caption] Md. Anisur Rahman again also awarded individually as Outstanding Innovation prize in News & Media category by making the National ID Bangladesh app. This app is all about the National ID information for Bangladesh. It has every single procedures, directions and updated applications to download regarding applying for new ID, if the ID is lost, edition, changing of location etc. The app has a feature to apply online and validate the ID through the app which will be live if the govt. permits and allows to provide that kinds of services. The app is available here at Firefox Marketplace: marketplace.firefox.com/app/national-id-bangladesh [caption id="attachment_8699" align="aligncenter"] 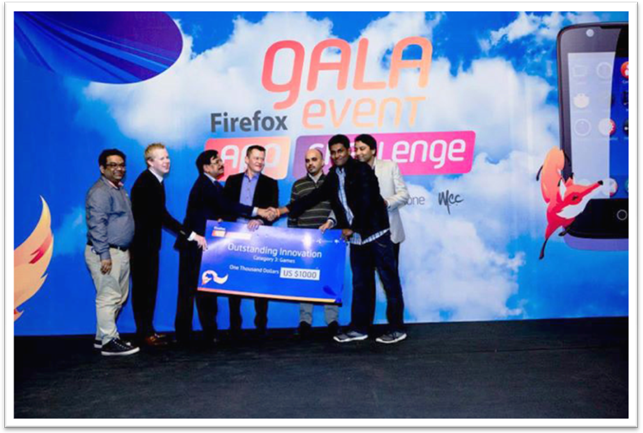 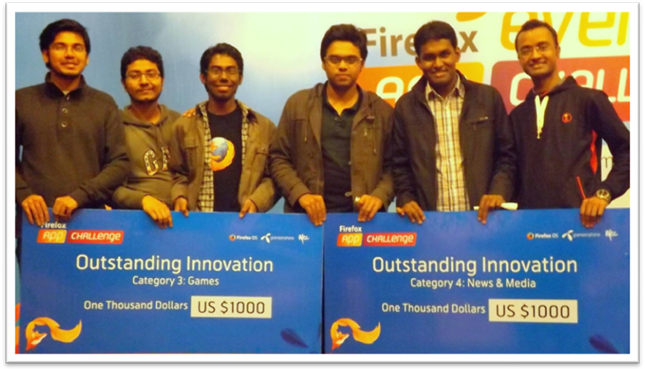 AIUBians with the winners at the Gala[/caption] In the Gala event some other Mozillians from Mozilla Bangladesh as well as student of AIUB were also invited at the Gala named Ratul Minhaz, Asif Raihan, Khaled Syfullah and Mahbub Alam Papun. They as well as the winners are also proudly member of AIUB Computer Club (ACC). [caption id="attachment_8702" align="aligncenter"] 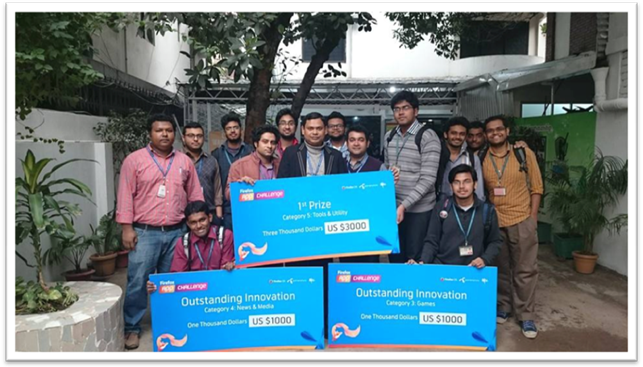 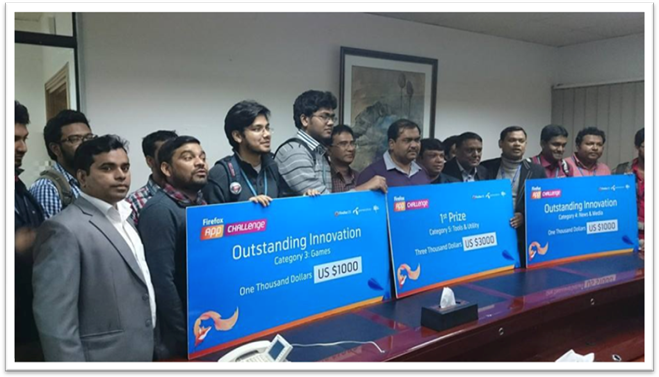 Chairman, Directors and Department Heads, wishing and celebrating with the winners[/caption] AIUB authority and faculties are very much happy with these achievements of their beloved students. They blessed their students from the core of their hearts by wishing and celebrating after arriving on the varsity premises. A short note to be added that FSA members are collaborating with AIUB Computer Club (ACC) and ACC has been facilitating all the trainings and activities that are being arranged and organized in university campus. All the winners are active members of ACC and ACC is also proud of their achievement.